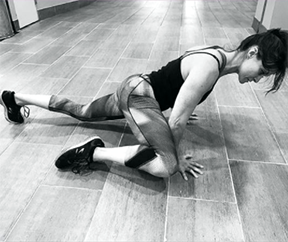 Lisa's philosophy to a quality life is built around fitness. Movement and proper diet is the key to a healthy lifestyle. Take control of your fitness NOW!

Lisa specializes in custom-tailored programming to address your specific needs and goals, so be sure to contact her for your complimentary 30-minute fitness assessment.
CALL TODAY!
917.371.6333

Animal Flow is a bodyweight-based movement technique; there are no machines or equipment used. The Animal Flow movements create a complex interplay between the body itself, the force of gravity and the resistance of the ground. These exercises are multi-planar, making them a great method for improving mobility and stability, both of which are important for healthy joints. Other benefits of AF are improved flexibility, endurance and power, as well as increased neuromuscular efficiency. Similar to Pilates, movements have various degrees of difficulty based on one's mastery of the skill and level of fitness. They can be regressed or progressed for modification as needed.

In an AF exercise, because the primary source of resistance is rigid, such as the ground, we call that a "closed-chain" movement. On the other hand, when the primary source of resistance is moveable, such as a dumbbell, we refer to that as an "open-chain" movement. Examples of the former would be a squat or a push-up, since the ground remains fixed despite the body's forces acting upon it, while a kick or a chest press are considered "open-chain" since the barbell or the leg itself moves through the medium.

A primary benefit of Animal Flow is that it loads multiple joints simultaneously. This, in turn, means that multiple muscle groups are working as well. This type of training is referred to as "functional." We live in a world where the activities of daily living require us to move three-dimensionally. Therefore, training in a similar fashion helps prepare our bodies to move more efficiently in life.

These are the basic concepts of Animal Flow. Now that I've introduced them, stay tuned for my next entry in which I'll describe the six basic components of the technique in order to provide more specific information on how we can use them to develop an actual "Flow."